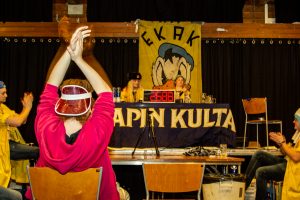 Hey everyone! My name is Oskari and I work as the guild’s Master of International Affairs and the International Student Captain for the year 2019 and until the possibly arranged Wappu. With my position in the guild come a lot of responsibilities, but some very lucrative boons as well. I get to visit with some of the other boards of Electrical Engineering around the Nordics. These are an account of some relations we have with Sweden and Norway.

In February 2019 me, our Master of Company Relations Juuli, Secretary Emmaleena, Finnish Freshman Captain Janne and Master of Studies Jaakko flew to T

rondheim in Norway for NTU’s Electrical Engineering guild Omega for their 100th year annual ball. We left well rested after our guild’s annual ball PoTa98 the week before. Of course not just us that attended, as Gotenburg’s Chalmers University Electroteknologsektionen, Stockholm’s KTH Electro and Lund’s LTU E-sektionen made their way there as well to celebrate our dear friends big year. This trip was the second time I met people from Lund.

Our last year’s Master of International Affairs Lassi Mölsä had invited a few from LTU E-sektionen board to PoTa98, as apparently we had had some connections with them around 15-20 years ago (no one seems to remember) and he decided we should probably start those relations up again. So as this year’s MIA I hosted them for PoTa98, and also went to their NollEgasque this week (September 2019). The experience was very “Uncanny Valley”’ish. Their traditions are so similar but in weird ways a bit different, that the whole time I was there, I felt like home but away at the same time. Instead of Otatarha Racing they hold a sea battle between the guilds during their freshman week in a large pond on campus. Instead of a hexagonal shape, their cap is more like the ones they have in

Anyways I’ve travelled a lot more this year than I do most years, and this week I’m blasting off to Sweden again for Kallefestivalen in Chalmers. As a closing message to all International students and Finnish students: Make sure you visit other countries and make friends with people from all around the world! Your time in Aalto might be one of the easiest places to do so, you never know when you happen to meet them in another place, at another time.